Well, I am not quite sure what to make of this just yet, but I am keeping an eye on the situation to see how it gets resolved.  What situation am I talking about?  The seemingly under-reported (or not reported at all) situation happening in the course Teaching Goes Massive: New Skills Required, which is offered by Paul-Olivier Dehaye of the University of Zurich.  I have to say that initially the course description did not draw me in because anyone who claims that they will teach you about MOOC teaching is either naive, or selling snake-oil since the developments are so new.  I would prefer an approach, like a collaborative exploration (pioneered by a colleague), or something like #rhizo14 on the topic.  In any case, I re-read the description (below) and decided that I had 3 weeks to devote to the course.  My approach would have been a cMOOC style approach since the instructor didn't have a set syllabus. This way I could, potentially, continue to explore what it means to learn, teach, and design for MOOCs. The course description is as follows:


The course grew out of the author's experiences as an early adopter and advocate of newer technologies (such as Coursera) for online teaching. During the past year, the author often came in contact with higher education professionals who felt lost in the new landscape, and unprepared technology-wise. This is an attempt to educate anyone in this situation, and thereby empower everyone to anticipate changes in the field and make better professional decisions. Part of the emphasis will be to explain the technology, because it was and will be a catalyst of further evolutions in education.

Week 1  went well enough. From the interaction it seemed like this was a cMOOC/xMOOC hybrid of some sort.  There were some videos, in CommonCraft style, as well some external resources. The forums seemed to go well, so I decided to roll up my sleeves and participate a bit.  Then week two came, and the content was gone. No forums, no videos, no external resources, no people.  What the heck? A technical glitch?  No word from coursera or the instructor, neither by email, nor in the forums.  Well, coursera staff have said that they are looking into it, but nothing other than the boilerplate "we're doing what we can" response.

The course "homepage" (for those unenrolled in the course) indicates that the course is no longer in session (although I am still enrolled) and that there aren't any upcoming sessions (see screenshot): 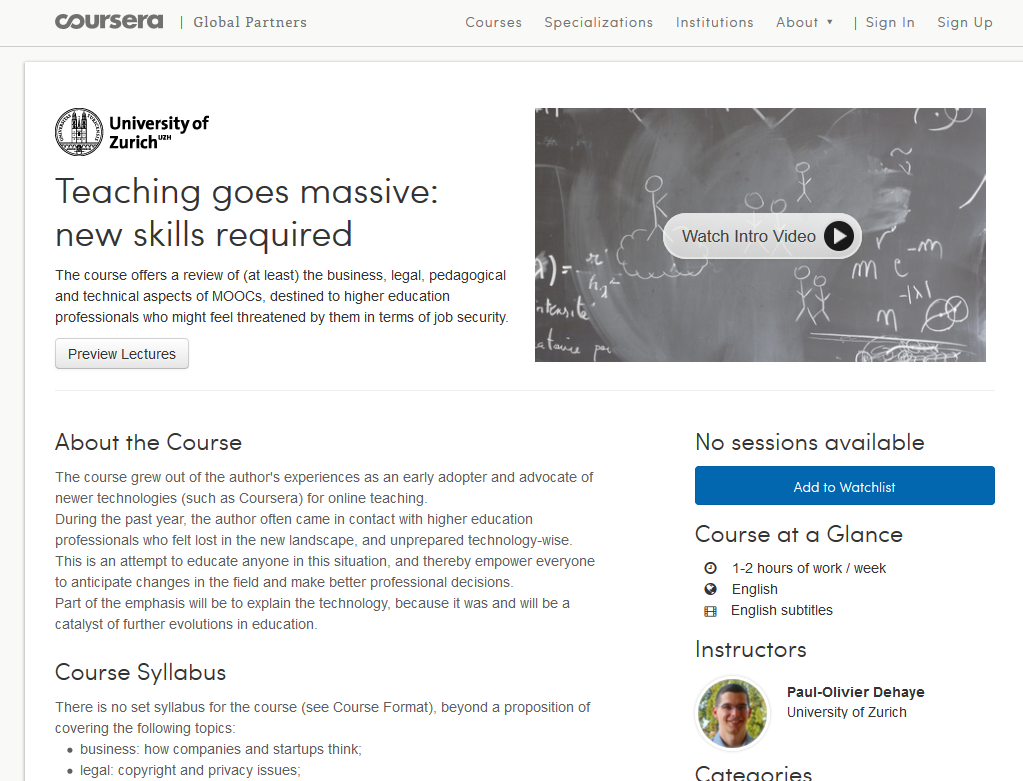 The professor is indicating, on twitter, that he has been removed from the course (I guess by coursera?), but there are no other facts around the interwebs:

Week 2 now is back, with some videos that Paul-Olivier produced. One of the compares coursera with edx, creative commons, copyright potential issues. I don't know if this is a no-no as far as the coursera terms of service go, but it would be interesting to go through them and have a look (whoever has time to read legalize of these MOOC LMSs).  Old threads are locked, which is a bummer because there was some nice discussion going on in some threads, and Paul-Olivier came back using a student account really briefly and then disappeared again.

The thing that I find most interesting is that neither InsideHigherEd.com nor the Chronicle have reported on this.  Back when GeorgiaTech's MOOC failed to launch, there was a lot of news coverage.  Now, perhaps the media, back then, wanted to discredit MOOCs (or pretend they are Nelson Muntz and say "ha-ha!" toward one effort that didn't go so well). Perhaps the media doesn't particularly care about MOOCs these days, but I certainly think that it was worth a brief mention somewhere.

Anyway, unlike GeorgiaTech's #FOEMOOC that shut its door to enrolled students as well (and left them without info), this MOOC, #MassiveTeaching, appears to have left currently enrolled students in the course, thus providing a fertile ground for some FUD to develop. Since the course was and experiment, this has given some people the excuse to claim fishing attempts in the course, or comparing the course to a massive experiment in the same group as facebook's recently controversial experiment. Some are also proposing that the course troll(s) may actually be Paul-Olivier running and experiment on them.  In any case, not much is known, and everyone is mum.

From a research point of view this is FASCINATING.  I would love to get a hold of the discussion forum data for both discourse and corpus linguistics analyses. On the other hand, I fear that coursera, and all involved parties, are handling this one wrong again.  We are now entering the third and final week of this MOOC on MOOCs.  Let's see how this pans out.

What do you all think about this?

Apostolos K. ("AK") said…
I am actually enrolled in this course as well. Coursera has now posted to the students that they are working with Univ of Zurich to finish up the class.
July 5, 2014 at 5:25 PM

Apostolos K. ("AK") said…
I saw that they posted a note on the announcements once I blogged this. It still doesn't give the learners much information, so I guess we'll see what happens. I am wondering what the internal politics are and what the issues that came up are. It would be great to be a fly on that wall!
July 6, 2014 at 9:12 AM

Apostolos K. ("AK") said…
I was a former student in that class. I DID receive email looking like official Coursera from Dr Dehaye telling me one day in advance that he was going to shut down the discussion forum. I did not know Dehaye other than I was in the course. I sent a report to Coursera security, as I thought it was a prank or system security problem. Coursera confirmed they got my report. Now I wonder if some of the class were selected to get the email and others didn't. I un-enrolled, it seemed so bizzarre.
July 10, 2014 at 4:58 PM

Apostolos K. ("AK") said…
Re email from coursera before the forum shut down: The email said the reason to stop the discussion forum was because everyone was so over-involved...this contradicts what UZH stated that the goal was to facilitate communication! Before the course opened Dehaye discussed a plan on elearnspace blog to use that Course course as a precursor to having folks work on open-source edX projects. I'm not convinced that the "experiment" was not a guise to use Coursera to attract 1000's and then find a way to continue working with a select few on an entirely different project. I quit Coursrsa and that class. Just too weird. 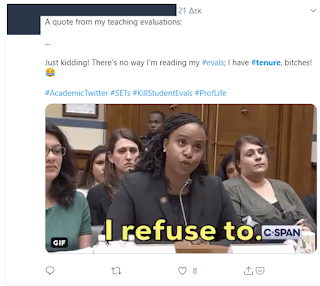 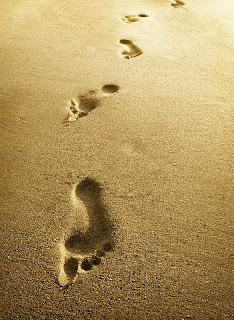 Cut the bull: The demise of the Baccalaureate has been greatly exaggerated 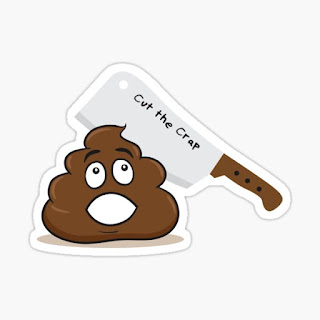 Courtesy of Redbubble After one-too-many "news" posts on IHE about plagiarism and "rigor" I decided to stop subscribing to IHE's RSS feed.  Idiocies that used to be a comment left in an actual news article (one which you could ignore) now have been promoted as opinion pieces on IHE.  To put it quite simply the junk-to-treasure ratio is now completely off on that site and there is no longer value to keep checking it as part of my regular news feed. That said, there was an article back in August (wow, a month went by!) by Ray Schroeder that I wanted to respond to. The article is titled Demise of the Baccalaureate Degree  and it provokes the reader with the following lede "Overpriced, outdated and no longer required by an increasing number of employers, is the baccalaureate in a death spiral?"  Let me just say that this is BS, right now. Go ahead and read it, if you'd like, and come back after that. It's disheartening to see a leader in distance
Read more